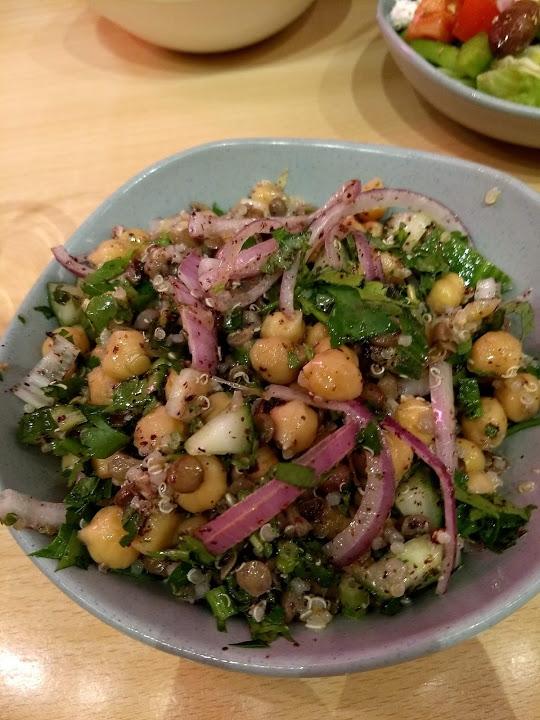 We ordered the mix grill from the sharing menu. The food was mediocre, nothing special. The Lam gyros was burnt. Not worth the price at all. The staff had a "well that's how it is" attitude and very dismissive. We were given sits outside although we had booked 2 days in advance. Outside seemingly had two types of outdoor heating, a ceiling one and a portable standing heater. Both were off. We asked to be sited inside because we had young children with us. We were refused stating fully booked. We asked for the outdoor heaters to be turned on. We were told by two different staff dismissively that they will be. They were not for the duration that we were there although it was very cold. The surcharge for public holiday was way too high. Overall, our group did not enjoy our time at this restaurant and we will not be returning.

Food was nice. It was really busy so I can't be to judgemental but often you get your drinks first and then the food

Food was absolutely amazing and service was awesome. Really really impressed! Can’t wait to go back

Very nice food. Very nice and friendly service and pricing. One thought I had though, and that was the volume of the house music... it sounded authentic... but was TOO loud for me. Otherwise, a tasty eat out guys.

We went there on Saturday with a high recommendation from a friend & we were VERY DISAPPOINTED. The service was appalling & the staff were very young & scattered. It took 90 minutes to receive our main course & there was a lot of irate takeaway & eat in customers as well. The food was below average and to be honest I wouldn't recommend this place to anyone.

A group of 4 of us had a very poor dining experience here last night. We arrived around 5.30, and ordered our entrees and mains. The entrees came out within 20 minutes which was fine but after 6pm the kitchen was unable to keep up with the orders. It took another hour and a half to be served our main meals, which when we received them, the meat was overcooked and the souvlakis had very little filling. One of our party was served her meal 15 minutes before the rest of us. There were people dining that I saw waiting for over an hour without being served at their table and more than a couple who were standing for 50 minutes or more waiting for their takeaway who were not at all impressed with the service. It is very likely that like us, they will not return. Eventually after having many customers asking when they could order or where their food and drinks orders were, the staff told customers that there would be a 50 minute wait for food. They should have told customers this in the first place. It looks like they had plenty of staff but simply didn't have their act together. This place used to be good but has gone downhill, there are plenty of other restaurants in ozone to choose from and if you are looking to have a nice meal with friends and family, particularly on a weekend evening, then it would pay to go elsewhere or be disappointed as we were.

The Food here is incredible! The Staff were amazing, so accomodating and kind. Highly Recommend.

I am basing my review on my today's take-away experience. Maybe things are different when you dine-in. We ordered a lamb gyros and an open chicken and lamb mixed souvlaki. The gyros was rather small for $17 and even though I asked for the chips aside, not inside it, they managed to still put chips in. The meat in the gyros and the open souvlaki was dry and bland. What was extremely annoying is that my take-away order didn't have any cutlery. Wouldn't it make sense to provide the cutlery automatically, so that the client doesn't have to remember to ask for it? We were planning to go to a close-by park but ended up having to go home as we don't use our hands to eat food. (Due to the detour the food was cold, guess it's the risk for take-away; cold chips and pita bread doesn't help improve the bland meat.) This was my first experience and based on it I'm not sure I'll be back anytime soon. I get better food from any local food-truck or fish and chip shop, paying half the price for something tastier and bigger. Don't understand why the rating is so high.

Meals were good and they came quickly. Really would have appreciated more meat and less salad though.

Great food pretty good service if a little slow But it is mother's day...

I ordered the Falafel Shepard's Bowl and it was an absolute flavour bomb!!! The homemade falafels were so delicious and I loved the accompanying salad, tzatziki and rice mixture. Will definitely be back to order this again! The food was so yum!!

The packaging is Neato. Lemon potatoes yum same with the salad and pita bread. Couldn't really care for the falafels not much flavour and bit dry. Think if you had a sauce drizzled over everything this would be scrumptious meal. Overall pretty good, lil bit expensive.

Best place in victoria love everything they serve

Delightful surroundings in the plaza, prices are quite reasonable and the quality of foods is .......... Well Greek and delicious. Enjoy your visit and meal with wonderfully talented staff making sure your visit is fun and enjoyable.

Haven't been back here since it opened up and it's looked like the place is a little worn down, but boy is the food still amazing! The pita they use is probably the best one I've had in recent memory and the other dishes on the menu are also great. The souvs are great value cause they come with a side as well, don't pass up on the lemon potatoes, honestly way better than the chips.

Liked the place and the food. Recommended.