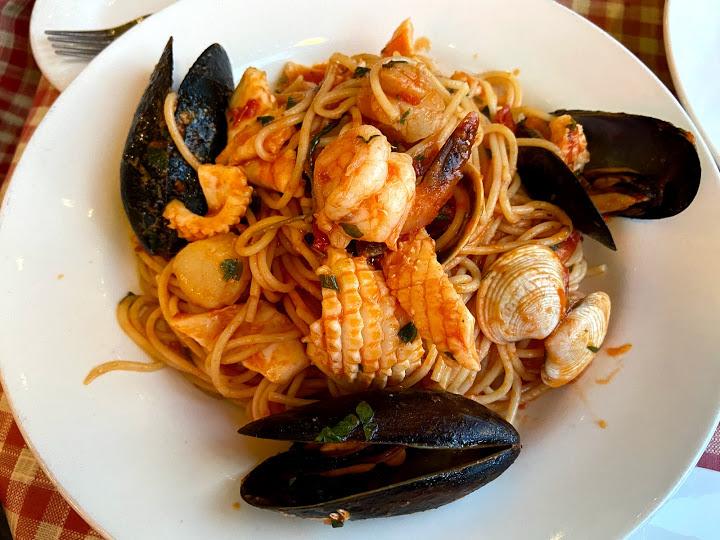 Are you serving late on Monday nights Say 9.30 pm

Very nice pizzas will be back again ? well we came back after a year not as good ?waited for menues ?then waited to be served we adventually got served they took so long that we left dissapointed

Big portions and great atmosphere. Had the lasagne and it was delish!

We have been here many times b4, and this particular time we waited 20 min b4 even getting a menu and table water. Several staff members just walked back and forth without even looking at us. Restaurant was less than half full So no excuse for poor service. We left and looked for an alternative . Shame:(

Very Friendly service delicious food bit pricy for mains but entrees are generous. Sadly there was litter under table when we sat down including disposable gloves which was off putting..

Amazing authentic Italian cuisine. Excellent service and very accommodating. Recommend to book in advance as the place is very busy but the will try their best to find you a table. Highly recommended.

Adelaide Icon..Sicilian owner and waiters. Jokes are older than Ancient Rome. Get the Marinara... sensational !

Best Italian food ever, always busy. Good service and reasonable pricing. They now have subsidized parking around the corner to make life easier, ring to enquire.

The award winning seafood pizza was fantastic and everyone else at our table enjoyed their meals too. The service was prompt and jovial. We had a good night sitting beneath the photos of the rich and famous who have also enjoyed this experience. Bravo!

Huge servings of food! But delicious

If you enjoy unprofessional banter; staff arguing with the obnoxious owners, staff eating in front of customers before their shifts starts and a 50/50 chance you might get table service then this place is for you. Seriously Gordon Ramsay would have a field day with this place, typical run down Italian joint owned by oldies who don't know a thing about professional standards. I cannot comment on the food as we received no service for 15 minutes after seating and had to leave to find food elsewhere. Fortunately we discovered Madre restaurant down the road and oh lord the difference, beautiful establishment, very attentive staff and typical professional standard you would expect and the food was amazing.

This is place is the best Italian food in Adelaide. Love love love. You must try if you haven't. My favorite restaurant

3 generations of restaurateurs! La Trattoria is now one of the oldest restaurants in Adelaide and is still owned and operated by the original proprietors, Andrea (Andy) and Natale (Chris). With Andrea being crowned the world’s best pizza maker in New York and family tradition that dates back to 1968, is it any wonder La Trattoria is such a success. Antonino Parisi, their father, operated Marcellinas and it was there that the boys learned how to make pizza. All other Italian cuisine was taught by who else but Mama!With the growing success of their father’s restaurant, a sister restaurant was born. In 1975 La Trattoria was established by Andrea and his brother, Natale Parisi. Many stories make up the history of this little piece of Italy, which is well known for its old school service from traditional Italian waiters. ​ This new restaurant, La Trattoria, would be a logical progression for the boys and their restaurant would reach high acclaim amongst the restaurant industry